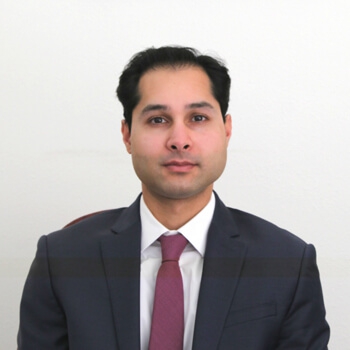 Hassan Jatoi is the President at Jatoi & de Kirby, A.P.C. He joined the predecessor firm Law Offices of Vaughan de Kirby in December 2014. After doing outstanding work for the firm and its clients Hassan became Senior Associate managing the firm's EB-5 practice. In May of 2020 the firm was renamed Jatoi & de Kirby, A.P.C. and Hassan has taken over the firm's responsibilities as Managing Partner.

Hassan brings with him a very unique personal background and the firm has benefitted very much from his know-how. Hassan graduated with his Law Degree (Juris Doctor) from Whittier Law School in Southern California, prior to which he earned his Bachelor’s degree in Economics from the University of Michigan at Ann Arbor. He has gained rich professional experience in immigration, having worked at our firm for over 5 years. Prior to that, he was a founding partner at Jatoi & Smith LLP, dealing exclusively with immigration matters.

Being an immigrant himself, Mr. Jatoi understands how difficult it is to adjust to life in a new country. Having grown up in Islamabad, Pakistan, Hassan immigrated to the United States just after he graduated from high school. He remembers how difficult making the transition was: between getting a social security card, driver’s license, and eventually applying for citizenship – it was very stressful for him and his family.

Additionally, Hassan recalls the difficulties that his family went through in his native Pakistan. Because of a complicated and sometimes convoluted legal system, his family suffered unjust financial and personal loses. These family experiences had a profound influence on Hassan, compelling him to immigrate to the United States and eventually to become an attorney.

Hassan knows firsthand the gravity in the choice to immigrate, and so he works hard to ensure a smooth transition to the United States for our clients. He has in-depth knowledge of both family and business immigration, having filed thousands of petitions, ranging from Adjustments of Status, Green Card Renewals, and Naturalizations, to EB-5s, H-1Bs, and E-2s. In addition to English, Hassan is fluent in Urdu and Hindi, easing communication between our firm and our clients from Pakistan and India. He is committed to working towards our clients’ successful immigration.